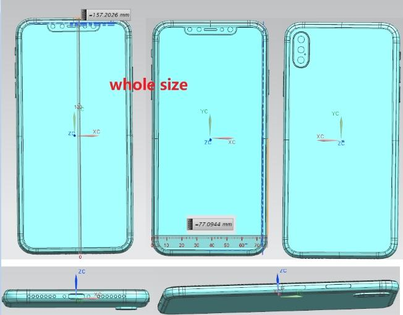 In May my exclusive story confirmed Apple’s new iPhone line-up and one cancellation. Now, I can reveal the designs of the most exciting models and the radical move Apple will make…

Working in collaboration with popular accessories maker Ghostek, a partnership which previously saw me leak Samsung’s final Galaxy S9 design in December, I have obtained schematics for both the so-called ‘budget iPhone X’ and the super-sized iPhone X Plus. And while I expect the former to be the bestseller, it is the latter which will shake-up the smartphone world.

Let’s break them down.

iPhone X Plus – A Triple Threat

The headline news is the schematics show iPhone X Plus will introduce triple rear camera. Huawei beat Apple to market with this technology in the excellent P20 Pro, the iPhone X Plus will be the handset to bring it to the masses.

Apple’s triple lens setup is currently unknown, but it would make sense to copy Huawei’s approach of a monochrome camera aiding the primary and telephoto modules. This produced class-leading low light photography. Low light is also an area where Apple has struggled against rivals (one in particular) over recent years.

Interestingly, I understand the second generation iPhone X will stick to two cameras so – once again – Apple will save its flagship photography for the largest (and most expensive) model.

In my May exclusive, I revealed there would be no ‘mini-iPhone X’ and again these schematics show Apple is thinking big.

Yes, as widely rumoured, this will be a 6.1-inch phone.

Its budget roots can be seen in the single rear camera (it will also lose 3D Touch), while you’ll note the notch looks more pronounced.

To this end, I have been told the budget iPhone X will have first generation Face ID technology while the new iPhone X and iPhone X Plus have gen two. But take that with a pinch of salt as it comes from an unproven source.

Of course, the real appeal of the budget iPhone X will be the cost with Apple expected to slash prices across the range by as much as $300 compared to last year.

Needless to say, this far out it is possible for designs to change but with mass production taking several months to ramp up there would be no time for anything other than the most minor of tweaks.

So, ladies and gentlemen, you are indeed looking at two of Apple’s most exciting iPhones in years…